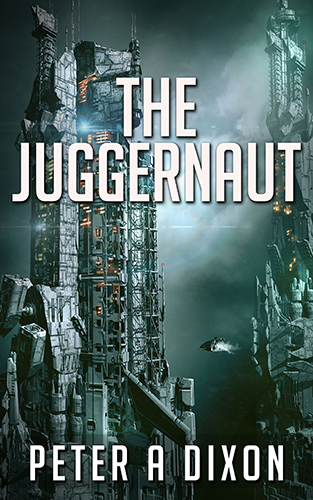 Tales from the Juggernaut

I love the characters and am really looking forward to seeing where the next part of their journey takes them.

Amazon review
I can't wait to see what comes next.

Amazon review
There is evocative description, characters are well-rounded... This story is definitely worth reading!

Amazon review
From the moment I started reading it I was fixed and honestly cannot wait for the next one in the series.

Amazon review
...well paced, has a strong, likeable set of core characters... genuinely exciting scenes. There is a hint of John Scalzi in this book through it's setting, subtle humour and 'niceness' of the leads. Well worth a read...

Amazon review
...a fascinating look at what human society looks like on a post-Earth satellite.
Goodreads review
Previous
Next

A city in space built from the twisted wreck of a thousand ships, in a decaying orbit around a dying star.

When a distant colony of stars lost contact with earth, they descended into the fires of a civil war. From the ashes rose the Commonwealth – systems united in their struggle to survive the aftermath and rebuild civilisation with the remnants of the technology they once had.

The mission to colonise Baru was to be the first step forward in a hundred years. Three colony ships set out to discover a new star and build the first hyperspace beacon in three generations.

But the mission failed. Far Horizon vanished through the unstable wormhole. The Rising Starand New Dawn were destroyed.

Tila’s parents were among the thousands lost. Now she has joined the ranks of the dispossessed.

So when Tila finds the impossible – a shuttle from the Far Horizon buried deep within the Juggernaut – she sets out with her friends Ellie and Malachi to uncover the truth behind the colony mission.

Any cookies that may not be particularly necessary for the website to function and is used specifically to collect user personal data via analytics, ads, other embedded contents are termed as non-necessary cookies. It is mandatory to procure user consent prior to running these cookies on your website.